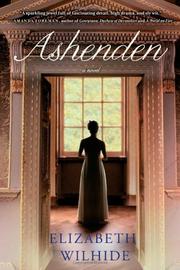 Episodes in the life of a grand British country house, with its upstairs and downstairs dramas, add up to an unusual, engaging, Downton Abbey-esque saga.

Fortunes are lost and gained, relationships forged and broken, individual fates briefly glimpsed then encountered again decades later as the centuries melt into each other in U.K.-based Wilhide’s unusual debut. Architecture, social shifts, private lives and next generations are the running themes, with Ashenden Park, a magnificent Palladian stately home, as the beating heart and central location of the sequence of vignettes that starts in 2010, with the reluctant inheritance of the neglected pile by a brother and sister, and then shifts back to 1775 and the arrival of the golden Bath stone from which it will be built. Wilhide introduces Ashenden’s architect and his gifted apprentice, who is killed in an accident during construction, and then the various owners: a spendthrift noble; a thrifty haberdasher; a property developer. But the servants are included too, the pregnant chambermaids and unfairly dismissed housekeepers. While much of the historical background might seem routine, Wilhide brings freshness and emotional depth to the snapshots and links them astutely. Oddly, the most modern scenes, though tidily interleaved, are the least memorable.