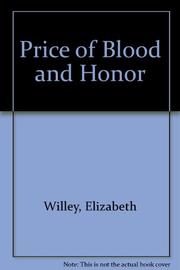 THE PRICE OF BLOOD AND HONOR

Direct sequel to A Sorcerer and a Gentleman (1995), as the latter title wasn't to The Well-Favored Man (1993), though it was confusingly similar. The sorcerer Prospero of Argylle, keeping to his bargain with his brother, King Avril of Landuc, prepares to destroy all his books and sorcerous equipment—but he allows his equally sorcerous son, Dewar, to copy as much of the books as he can before the deadline. Then, dutifully proceeding to Avril's palace with his daughter, Freia, a disturbed and lonely girl, Prospero agrees to marry Freia off to Avril's heir, Josquin—who, secretly, is gay and prefers Dewar. Treated wretchedly by everyone, or so she feels, Freia drowns herself, only to be hauled back to life by Dewar, who must promise his firstborn child to an ancient, powerful Stone in payment. Freia goes to live with the honorable Prince Marshall, Gaston; Prospero returns to Argylle, where he falls under the influence of the evil witch, Odile, Dewar's mother. With Freia absent and Prospero preoccupied, Argylle's magical Spring dries up, the land dies, and its people suffer. Many years will pass before Freia and Dewar, becoming lovers, will return to Argylle in an attempt to restore the Spring and oust the horrid Odile. The scenario has its charms, but the characters—still above average—aren't given much to do, and what little plot materializes was already shaped in the preceding volume. Bloated and ordinary, then, and largely unsatisfying.