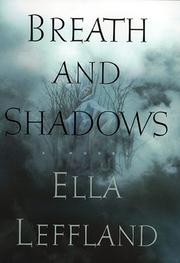 An enthralling generational novel, the first in ten years from this Danish-American author (The Knight, Death, and the Devil, 1990, etc.), vividly reflects both the contemporary interest in researching family history and the haunting reconstructions of the past that distinguish the popular fiction of Denmark’s Peter H—eg. But Leffland’s rich novel is an impressively original work: a dark tapestry woven from the histories of a family’s several generations seen on crucial occasions that are separated by two centuries. In the approximate present day, middle-aged siblings Paula and Philip shake off their solipsism—he’s a weary, thrice-divorced American businessman, she a would-be sculptor living alone in the Swiss Jura Mountains—to seek information about the father (—the engineer—) they scarcely knew. A century earlier, their Danish grandparents, wealthy Holger and Grethe Rosted, blissfully indulge their mutual passion and separate avocations (he paints, she translates Zola)—until an overmastering sorrow for the victims of the modern age’s European wars (her grandfather, most specifically, who died young at the battle of Leipzig) awakens in Grethe the strain of madness that afflicts her family. Its source is found in the story of Grethe’s great-grandfather Thorkild, a dwarfish “Counselor” (onetime “financial advisor to the king”) whose intemperate rages and inexhaustible vitality together propel him on an odyssey to postwar Germany to seek and, in a series of brilliantly staged hallucinations, find the only human he has ever loved: his dead son. Excepting Philip, whose midlife crisis is, simply, dull, Leffland’s several protagonists emerge with stunning clarity, thanks largely to a simple, ingenious narrative device: they’re shown from the partially comprehending viewpoints of minor figures (including Grethe’s beloved housecat Olaf) who only incidentally cross their paths. The pages that convey Counselor Thorkild’s mingled hatred for “the rot that is humanity!” and instinctual lust for life vibrate with emotional force and psychological complexity. He’s an amazing creation in this, Leffland’s best novel yet.