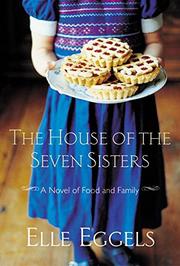 THE HOUSE OF THE SEVEN SISTERS

Seven sisters run a bakery after their mother’s death and father’s disappearance—in a Dutch family saga that edges toward magical realism.

Emma, raised in post–WWII rural Holland by her six aunts, her mother, and Oma, who takes the role of Grandmother although her literal relationship remains unclear, is 13 when the father she’s never known shows up in the bakery to die. Suddenly curious about her own upbringing, Emma begins to question her family, and the sisters’ history unfolds. Devout but far from conventional Catholics, the sisters are bound together despite shifting affections and loyalties. When only a teenager, Emma’s mother Martha, the oldest sister, takes over the bakery and care of her sisters. Her husband Sebastian moves into the bakery but leaves when Emma is an infant, unable to handle the household of women. The other sisters’ love lives are no happier; no man can compete with the power of their combined femininity. Fragile Marie waits seven years to marry, then returns home weeks later without comment and eventually becomes a nun. Warmhearted Christina, who is more of a mother to Emma than Martha herself, finds a wonderful loving husband, but he dies soon after the wedding. Tomboy Vincente is tricked by a scam artist. Dreamy Clara falls in love with sex, while her twin sister Camilla is forbidden to marry the hunchbacked neighbor who dies trying to cure himself at Lourdes. After Oma dies, she returns as a spirit/ghost/vision to teach Emma how to make sauerkraut and give general advice. Although they wander from the bakery, eventually the sisters end up together again, more united than ever when their long-lost father’s widow shows up (as the Oma spirit has warned) and claims ownership of the bakery. Even Emma, despite marriage and the birth of a son, is unable to escape the bakery’s spell.

Sensual talespinning: often evocative and involving, if a bit precious.