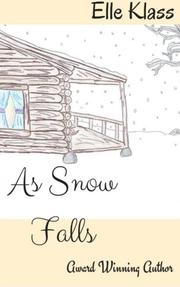 A view of snow falling across distant mountains and valleys frames this somewhat distant, fictional memoir of an elderly woman’s ordinary life.

Author Klass’ debut novel zooms in on a mountain cabin and its unremarkable furnishings, eventually revealing the main character—we never learn her name—who ends each chapter by watching the snow fall outside her window. This conceit will resound by the story’s end, but it occasionally grows a little tiresome along the way. The close focus of the opening chapter continues as the woman’s earliest impressions from infancy are revealed, but these details soon stall an already slow-paced storyline. Since the protagonist’s life is told with little action or dialogue, it’s difficult to become emotionally invested. The unnamed character moves through an uneventful childhood and early adulthood. She wanders the country, and a brief travelogue ensues, but it reveals little other than her unabated ennui. The protagonist then reunites with her first love. Marriage, children and the universal events of aging fill the pages, and a theme of family connections gradually develops. Despite her happy marriage, another past lover haunts her. On hearing about his death, she realizes that his love had influenced her decisions “beyond his grave”—an insightful commentary on the nature of lost love. Both a hurricane and an earthquake affect the woman’s life, but readers don’t experience either event; they’re simply told about them. Certain snatches of description stand out: “Her eyes were the color of steel wool and just as coarse; they could scratch and scar the soul of anybody.” In the final third of the book, when she discovers an unopened package that sparks her curiosity, this character’s flat arc begins to bend, and the package’s revelation works to create a poignant climax to her life story.

Fans of quiet memoir and romance may appreciate this woman’s benign, unhurried passage through life.