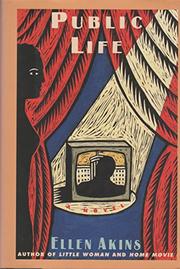 Another fragmented, sophisticated, terribly solemn novel by Akins (Home Movie; Little Woman)—this one starring Ann Matter, a shell-shocked media consultant whose fatal flaw is her fervent belief in her own media creation. Ann was once a sweet, pretty college student with a passion for film, but she lost her innocent enthusiasm once she became pregnant and agreed under pressure from her lover, David, to have the child. After the birth, Ann hands the baby over to David and flees them both in a desperate, misguided attempt to regain her purity. Undergoing surgery to perfect her appearance, she embarks on a cool, meticulous, comforting advertising career in which the appearance of objects, and the layers of associations she can evoke from their images, count for more than the objects themselves. It's a small step from this to taking a job as media representative for old-fashioned, fuddy-duddy Democratic Texas Governor Henry Anderson during his bid for the White House. Inspired by Anderson's real basic virtue, Ann eagerly grabs onto his best human qualities, exaggerating and enhancing them into a larger-than-life, mass- market image. Her efforts are so successful that by the time Anderson takes Pennsylvania Avenue his image has superseded his political positions, and he and his creator have fallen into a lockstep so in sync that it's difficult to tell which one of them is running the country. The union also proves too threatening for a jealous press secretary and Anderson's rebellious son, who soon conspire to sully Ann's and Anderson's reputations in the press. Despite Ann's struggles, her creation begins to wobble, and her tidy world is sent reeling as both David, reading in the papers of her struggles, and Anderson, panicked at the thought of becoming merely mortal again, take abrupt, violent action.... The power and independent life of the media image are, as always, an intriguing theme—but Akins's pointillistic, humorless style merely skitters across its surface.