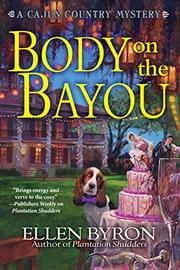 BODY ON THE BAYOU

Bridezilla and murder keep an unlucky maid of honor hopping.

Artist Maggie Crozat returned home to help run her family’s B&B at their lovely Crozet plantation in Pelican, Louisiana. Her very pregnant friend, Vanessa Fleer, has proved to be a demanding bride with long lists of outlandish, constantly changing demands. The bridegroom, Rufus Durand, is a suspended police officer whose family has a long-standing grudge against the Crozats. Luckily for Maggie, his cousin Bo, a detective whom Maggie’s quietly dating, isn’t interested in family feuds. Maggie wonders why Vanessa gets hysterical and Rufus laughs when she agrees to house Vanessa’s cousin Ginger Fleer-Starke and her co-workers Trent and Bibi. The entrepreneurial Ginger has built up a business buying, staging, and decorating houses, with Bibi doing most of the work. Even a lawyer recently moved from Houston has heard all about Ginger, who’s sued almost everyone she’s ever met and done nothing but cause trouble and fight with people since she arrived in Pelican. So when Maggie finds Ginger’s dead body in the bayou, there are all too many people who could have killed the manipulative troublemaker. Maggie and her family are lucky to have alibis, since they’ve already been involved in a murder (Plantation Shudders, 2016), and the current police chief has no love for any of them. Maggie feels she must do some sleuthing even though her every minute is taken up with Vanessa’s demands. Maggie also worries about Bo’s first wife, Whitney, who’s staying nearby while her new husband is overseas. A beauty whose autistic son, Xander, continues to connect her to her husband, she clearly has doubts about divorcing Bo. Digging into Ginger’s background yields even more motives, but who did the deadly deed?