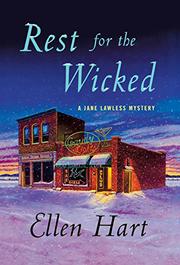 REST FOR THE WICKED

Her partner’s enforced stay in the hospital won’t stop a newly minted private eye from investigating the murder of his nephew.

Now that she’s officially licensed as a private investigator, Jane Lawless is ready to get down to the business of, well, investigating rather than focusing on managing the club and restaurant she owns. If only her first case didn’t involve her partner, A.J. Nolan, whose government name is “Alfonse Jasper.” Nolan needs help when his nephew, DeAndre Moore, is knifed outside of GaudyLights, Minneapolis’ local strip joint. The bullet lodged for some time in Nolan’s back has begun to migrate at an unfortunate time, leaving him bedridden and unable to investigate. GaudyLights isn’t quite what Jane was expecting. Owner Vince Bessetti tries to convince Jane to buy into the business; friendly law student/stripper Georgia gets a little too friendly; and the club’s food service is run by Shanice Williams, the cook Jane fired from her own kitchens. The murder appears solved when club dishwasher Elvio Ramos steps forward to take the blame, but a little digging from Jane suggests that there’s more to the story. She relies on the help of bartender Avi Greenberg to flesh out the situation a bit more, but since it’s been some time since Jane had a main squeeze, her mind is soon on Avi’s flesh itself. Jane’s closest companion, theater guru Cordelia Thorn, is in rare form, throwing out sassy one-liners as if she were on the stage rather than in the wings.

Giving Jane more spark than readers have seen in a while, Hart (The Lost Women of Lost Lake, 2011, etc.) brings new life to an aging series and hope for future installments.