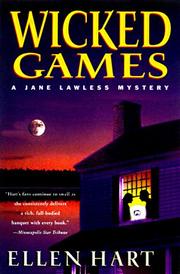 Little does Jane Lawless know what she’s getting into when she takes on Elliot Beauman as a tenant for her vacant Minneapolis apartment. Apart from writing children’s books, Elliot has an unusual sideline: He’s a psychic who occasionally helps the police in their investigations. (His latest reluctant coup will bring Jane’s brother Peter out begging for a TV interview, and at exactly the worst time in Peter’s own private life.) But Elliot’s family is even more disquieting than he is. His contractor father, Otto Kastner, is an abusive bully; his mother, Virginia Kastner, has never recovered from the accident that crippled Elliot’s late brother years ago; and his sister, Patricia Kastner, a predatory flirt who Jane’s current lover, Dr. Julia Martinsen, regards with jealous suspicion, has a romantic past as checkered as the flag at the Indy 500. After a disturbing encounter with a p.i.—hired by Virginia’s mother to see whether the vodka-and-Valium death of Patricia’s last boyfriend was really suicide—Jane decides a little discreet detecting of her own might be in order, and soon uncovers a whole string of eerily similar suicides. But events are already moving faster than she is: When Otto, trying to ingratiate himself with Jane, sends out a man to install a new porch for her gratis, the workman promptly excavates a skeleton in her back yard—which turns out, inevitably, to be the old Kastner yard. Workmanlike, overlong, and not up to the endearing nuttiness of Faint Praise (1995).