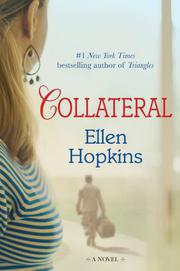 Written in Hopkins’ signature free verse (Triangles, 2011, etc.), this book examines the relationship between a young California woman and the Marine she loves in language that ranges from raw to tender.

Ashley and her Marine boyfriend paint their relationship in searing physical terms in this uneven tale of two best friends and the men they love. Ashley, a college student who still relies on her parents to support her, and Darian, her roommate, meet Cole and Spencer at a club one night. The two Marines are stationed nearby, but Wyoming-born Cole seems gentle and poetic to Ashley, despite his brutal profession. Ashley’s parents deplore the relationship, and her mother, who hates the military, is especially critical of the pairing. She believes Cole is a butcher, but Ashley, who knows that Cole writes poetry and has a loving, sweet side, is convinced he is a much more complex man than her parents realize. Darian and Spencer are another story, though. Their rocky relationship bounces from heaven to hell faster than a melting ice cube, and Darian’s sexuality is like a sign she wears around her neck. Although eventually married to Spencer, she can’t seem to stop finding other men with whom to occupy her time. Hopkins specializes in writing long-form free verse, and her fans are rabid about her work, but for those who’ve never before dipped a toe into this style, the book may prove tough going and, in some places, overtly sexual. Although the author assures readers she meticulously researched the book for details about the military and military life, she insists on calling Cole a “soldier,” which is a term appropriate to the Army, but eschewed by members of the Marine Corps. She gets many of the other details of military life right and brings much passion to her work, but that one major stumble may turn off military readers.

A melodramatic and very often overwrought volume that attempts to capture the heart and soul of what it’s like to be the girl left behind.