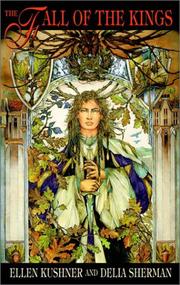 THE FALL OF THE KINGS

Sequel to 1987’s Swordspoint: A Melodrama of Manners, a tale set in an imaginary city that Kushner herself described as “not-quite-equal parts of Elizabethan London, 18th-century Paris, a dash of Regency of both, and even a little New York . . . . ” Here, it’s 60 years later, in a Renaissance Europe that’s not quite the historical Europe. Much earlier, the rocky North and fertile South were joined into one country with a King and Queen. Ivy grew out of the hands of some of the Northern King’s 15 wizards when he rode south for the wedding, leading his monstrously uncouth army. Very fanciful stuff, thinks University historian Basil St. Cloud three hundred years later, now that all the kings are long dead and the land kingless. St. Cloud admires kings but the Serpent Chancellor, Lord Arlen, appoints Lord Nicholas Galling to spy on University Northerners who favor installing a new king, drawn from royal blood, over the Council of Lords. The Council has also outlawed all talk of wizards and magic—since magic. . . doesn’t exist? If anyone could find the lost Book of the King’s Wizards, the spells in it might prove upsetting to the Council. When Basil is bedded by his new student Theron Campion, grandson of the scandalous Mad Duke Tremontaine, he finds tattooed ivy leaves entwining Theron’s body, a sign that he’s the son of ancient kings. Not that Theron doesn’t love the bossy painter Ysaud, who has painted a canvas of him modeling both throat-slit Hilary the Stag and his naked murderer—scandalous Hilary slept with deer in his bedroom instead of his wife. Then Basil buys an old trunk holding old manuscripts, including guess what, and Theron, a student of rhetoric, helps read it. Will wizardry return? Theron be king? Are the Serpent Chancellor and Galling closet sweeties?