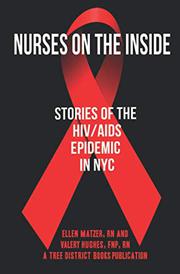 NURSES ON THE INSIDE

Stories of the HIV/AIDS Epidemic in NYC

by Ellen Matzer and Valery Hughes

In this debut book, two nurses show how the advent of the HIV infection permanently altered a vulnerable minority and the boundaries of global health care.

Based on actual events in their lives, career clinicians Matzer and Hughes begin their intensive, exquisitely moving narrative at the end of the 1970s in a Manhattan hospital where rapid-onset, opportunistic infections like pneumocystis carinii pneumonia first began immobilizing gay men at alarming rates. From the first hints of a “Gay Cancer” to future milestones in disease developments and pharmaceutical intervention, the authors diligently and compassionately narrate firsthand how a community joined together throughout the ’80s and ’90s to care for the dying, to inspire solidarity through candlelight vigils, to extinguish stigma and shame, and to fight for the right to die with dignity. With seamless ease, the book’s timeline smoothly oscillates back and forth from Matzer’s and Hughes’ historical trajectories through their grueling nursing school years into their close friendship and essential work with AIDS patients. Supplementing this poignant chronicle are reflections from both authors on the positive and negative aspects of that indelible era. As an open lesbian who was closeted when the epidemic began, Hughes remarks that she used to view the entire period of death and disease “through my identity as a gay woman, but lately, I think I have viewed it as a New Yorker. I felt that way especially after 9/11.” For lay readers, clinical footnotes are sprinkled throughout, offering explanations and specific terminology on disease symptoms and medical procedures. Structured in an intensely personalized manner with heartfelt prose and intimate, exacting details, the work ushers readers right into the authors’ AIDS ward, where sick men and women lay dying, at the mercy of homophobia and cruel bias, as disease researchers rushed to demystify and mitigate the medical carnage while perplexed politicians vacillated. The book is also a touching tribute to the resilience of a community; its unified, unconditional allies; and the human kindness that continues to interconnect everyone in times of horrific atrocities. “Despite all the bullshit that happens,” Matzer declares, “most of us come together when we need to.”