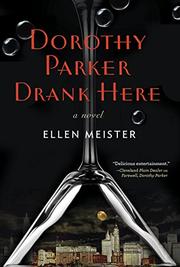 In the heyday of her career, Parker signed a guestbook that promised eternity. Against all odds, the claim turned out to be true, and now she haunts the famed Algonquin, greeting her friends after their deaths. They all go on to the afterlife, but not Dorothy. She’d much rather stay right there at the bar—but things are starting to get lonely. That’s where Ted Shriver comes in. A writer whose career plummeted after a plagiarism scandal, Ted is now dying of a brain tumor. If only Dorothy can convince him to sign the guestbook, she might just have some company. But things get a bit more complicated than she imagined. Norah Wolfe, an associate producer for a struggling television show, has her own reasons for wanting to talk to Ted. Neither of them will be able to get through to him unless they can help him tie up some loose ends…and maybe clear his name in the process. Meister’s Dorothy Parker is just as sharp, witty and pleasantly mean as fans would expect. Her humanity shines through, though, along with her humor. Her obvious loneliness, along with the dilemmas Ted and Norah face, make this a surprisingly emotional novel.

Not even death can keep Dorothy Parker down in this sad and funny story.