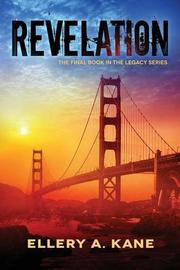 From the Legacy Trilogy series, volume 3

by Ellery A. Kane

In Kane’s (Prophecy, 2015, etc.) final installment of the Legacy trilogy, a teenage girl puts her life on the line to try to destroy a sinister company that produces powerful, mood-altering drugs.

It’s been 75 days since a secretive man named Quin McAllister left the San Francisco Bay Area and Lex Knightley’s life. Government authorities have instituted curfews and set up checkpoints to crack down on the consumption of “emotion-altering medications,” or EAMs. The newest, most dangerous EAM is Onyx, which causes aggressive behavior and has led to an explosion of gang violence on San Francisco’s foggy streets. Meanwhile, Lex has been hiding a fugitive Resistance leader-turned-drug czar named Augustus Porter, despite her hatred of him, as she hopes to obtain insider information that will help bring down EAM manufacturer Zenigenic and its ruthless, power-hungry CEO, Xander Steele. When Quin abruptly returns and teams up with Zenigenic as a spokesman for a new medication designed to make the world kinder, Lex knows there must be more to this strange alliance than meets the eye. Lex, with the help of some friends—including her intrepid reporter father and the somewhat untrustworthy Augustus—hopes to fulfill the wishes of her deceased mother, a Zenigenic psychiatrist who regretted her prominent role in the creation of EAMs. She plans to do so by solving the mystery and exposing the corporation’s dirty deeds once and for all. Kane throws readers right into the deep end without wasting any time recapping previous novels in the series. Fortunately, readers will likely find that her vividly detailed world and complex characters have lingered with them since Prophecy (2015). Lex has developed and matured a great deal since readers met her in Legacy (2014), though she still occasionally feels like a Mary Sue—a little too perfect to be real. The book is at its best when it focuses on the tragic psychological fallout from EAM usage, and at its worst when it focuses on Lex and Quin’s dull romance; they lack the spark to stand out from every other star-crossed dystopian duo. The book’s frenetic climax, set at the iconic Bay Bridge, will leave readers breathless and wanting more from Kane and her fictional world.

A satisfying conclusion to a flawed but often fantastically entertaining trilogy.