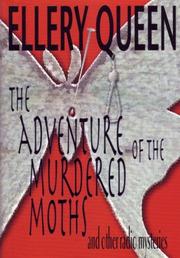 THE ADVENTURE OF THE MURDERED MOTHS

and Other Radio Mysteries

A gathering of 14 radio plays, each complete with a Challenge to the Listener, celebrates the centennial of the birth of the two cousins who wrote under the Queen byline.

Between 1939 and 1945, prolific Frederic Dannay and Manfred B. Lee published only two novels, instead pouring their energy into launching Ellery Queen’s Mystery Magazine and writing hundreds of plays for the weekly radio program The Adventures of Ellery Queen. The cast of regulars—NYPD Sgt. Velie and Inspector Queen, Queen's sleuthing son and his adoring secretary Nikki Porter—were perfectly gauged to the medium. So were the other obligatory conventions: the baffling mysteries, the limited casts of suspects more distinguishable by their accents than their psychologies, Ellery's snap deductions and logical solutions, the snapshots of Americana. The best of the nine hour-long episodes and five half-hour playlets gathered here concern apparently impossible crimes: a strangling in a muddy cave bare of all footprints but the victim’s, the theft of four diamonds from a sealed room, the case of the gangster who returned to his closely watched house for an umbrella (shades of Sherlock!) and vanished. The most negligible are those that turn on cryptic dying messages like “March” and “Black Secret,” a Queen specialty that virtually died with the cousins.

All 14 entries have a pleasantly retro patina, and even the slightest of them will give your brain a workout.