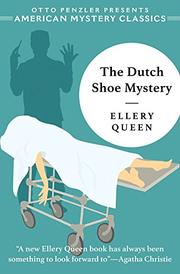 Wealthy philanthropist Abigail Doorn has been such a durable patron saint of the Dutch Memorial Hospital, and in particular of head surgeon Dr. Francis Janney, that when she goes into a diabetic coma, tumbles down a flight of stairs, and ruptures her gall bladder, there’s no question where she’ll go for treatment or who’ll perform the surgery. Ellery Queen, who’s dropped in to ask his old friend Dr. John Minchen a technical question about rigor mortis and then accepted his invitation to stay and watch the procedure, happens to be on hand when Abby is wheeled into the operating theater, unveiled, and found to be dead, a loop of wire embedded in her neck. The initial evidence seems to point the finger at Janney himself, but a brisk round of questioning and a search of the surrounding rooms indicate that the hospital’s leading benefactor was murdered by someone impersonating her favorite doctor, someone who left behind a hastily basted set of white duck trousers and a pair of shoes that become the principal, and virtually the sole, clue to the mystery. The suspects, as usual in the early Queens (The Chinese Orange Mystery, 1934/2018, etc.), are forgettable, and the potential motives straight off the rack. But the consistent emphasis on the hospital’s rigorous routine not only provides important evidence, but makes Ellery seem relatively less stiff than usual, though it’s still hard to forgive the constant drip of quotations presumably meant to indicate his irresistible erudition.

As for the solution that follows Queen’s signature “Challenge to the Reader,” it’s one of Ellery’s brainiest, built on a slender foundation but expounded at such exhaustive length that only the most churlish readers would think of resisting it.