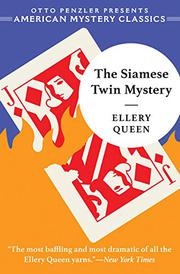 Chased up isolated Arrow Mountain by a forest fire that’s made the roads downhill impassable, Ellery Queen and his father, New York’s Inspector Richard Queen, find that what awaits them at Arrow Lodge, atop the mountain, is even more murderous.

Arrow Lodge, where the Queens arrive without invitation in the middle of the night, is something of a haunted house, complete with a scuttling figure Inspector Queen describes as a giant crab and a retainer who could plausibly have been played by Boris Karloff on the tale’s first publication in 1933. Dr. John Xavier, a celebrated surgeon who’s retired at 45, is clearly engaged in some kind of hush-hush research. But although he’s a cordial host to his unexpected guests, he says nothing that first night about the work he and Dr. Percival Holmes are doing, and by morning he’s lost his chance, shot to death with half a playing card, the six of spades, clutched in his hand. That card and a knave of diamonds found ripped in half in the dead hand of Dr. Xavier’s brother, Mark, when he’s murdered soon after, are virtually the only clues Ellery has, but he expatiates on their significance so early and often that some readers, though very few of the tiny cast of characters, may forget the much more pressing threat of the fire that’s inexorably climbing closer and closer. The result is the most atmospheric of the early cases about and by Queen (The Dutch Shoe Mystery, 1931, etc.) and the one in which the detective’s legendary analytical prowess (“what I am about to say constitutes probably the most fantastic reconstruction of a clue in the history of the so-called ‘clever’ crime”) is both most impressive and most strained, improbable, and out of place.

A pioneering, preposterously far-fetched, but still impressive example of the locked-in-a-cabin whodunit.