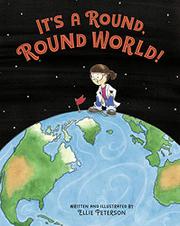 IT'S A ROUND, ROUND WORLD!

From the Joulia Copernicus series

In a confident first-person narrative, young scientist Joulia Copernicus debunks the story that Columbus “proved Earth is round.”

Informing readers that Columbus knew this fact, and so did most people of his time, Joulia also points out that “Ancient Greek, Islamic, and Indian scholars theorized that Earth was round WAY before Columbus’s time.” Confident Joulia explains how Columbus, shown as a haughty captain in the humorous, cartoon illustrations, and his fellow mariners confirmed Earth was round by discerning “that when ships sail away from you, they seem to disappear from the bottom. When they sail toward you, they appear from the top. On a flat Earth, you’d see the entire ship the entire time.” The accompanying illustrations, almost like animation cels, provide the visuals readers need to confirm these assertions. Joulia also turns to astronomy. A lunar eclipse is the highlight of a double-page spread with a large yellow sun, a personified blue and green Earth wearing sunglasses, and the moon moving in iterations through the Earth’s shadow. This shows readers that the Earth’s shadow is “ROUND!” Joulia has straight, brown hair and pale skin and is almost always the only human in any given illustration. It’s great to see a young woman scientist, but it’s too bad there’s not more diversity around her. Two experiments stimulate further exploration.

This lighthearted addition to the STEM shelf encourages children to question, hypothesize, experiment, and observe.