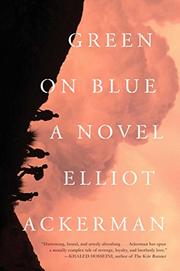 Set in contemporary Afghanistan, Ackerman’s tale unfolds through the eyes of Aziz Iqtbal, a young man whose brother is wounded in the bombing of a bazaar—and who vows to get revenge.

The geopolitical situation is complex here because the Americans are seeking to find and neutralize Gazan, the local Taliban leader who’s responsible for the bombing. It’s natural that they should lure Aziz to help them, and they enlist him in a kind of guerrilla force called the Special Lashkar. When, during a raid, Aziz follows his orders to the letter—he was told not to let anyone out the back door—tragedy ensues, and he’s forced out of the militia, though he’s actually given a new and more problematic job as a double agent. Along the way, he meets a series of characters whose complex motivations muddy the moral waters, such as Cmdr. Sabir of the Special Lashkar, who seems to want to continue fueling the war rather than to seek peace. Aziz also meets and falls in love with a village girl whose life he hopes to protect. Eventually he even meets Gazan himself, who’s not at all the monster we’ve come to expect. The lives of the characters are immensely complicated by the violence and political situation that surround them, and along the way, we witness their wrestling with the compromises they feel compelled to make between their consciences and their desires to perpetuate more violence.

Ackerman writes in a deliberately flat style that emphasizes personalities rather than military action—and he does justice to the political and moral difficulties of contemporary Afghanistan.