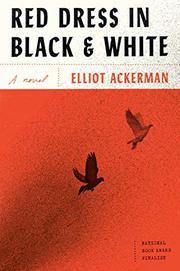 RED DRESS IN BLACK AND WHITE

At the intersection of love, art, and politics, characters within a romantic triangle and a few just outside it discover that they're puppets whose strings have been pulled by a bureaucracy and whose fates are connected in ways beyond their control.

The latest from a novelist who's both been a Marine and worked in the White House opens with a reception for photographer Peter, an American expatriate in Istanbul, to celebrate his provocative series of shots from a recent protest in Istanbul. Among the attendees is Catherine, another expatriate American and the wife of a high-profile Turkish real estate magnate; she is having an affair with Peter, and much to his surprise, she's brought her young son, William, to the reception. Addressing the party is Kristin, an American diplomat in Cultural Affairs, who has apparently helped facilitate the photographs (and perhaps the protest that they document). The reception is being held at the apartment of Deniz, the director of the gallery presenting the exhibition. Catherine’s husband, Murat, waits at home for his wife and son, who return much later than he had anticipated. There is a blowout; Catherine and William flee to Peter, and she hopes they can return to America with him. The rest of the novel alternates the narrative tension of a woman caught between two men over the course of a single day, with flashbacks that provide context on the marriage, the affair, the protest, and the much larger web in which these characters are caught, mostly without their knowledge. The novel is deftly plotted, though the characters themselves seem more like pawns in the author’s narrative scheme, lacking much flesh-and-blood depth, though perhaps this is a reflection of the “moral hollowness” that Catherine suspects in herself, as she is suspended between a marriage of convenience and what might seem to be an affair of convenience. As Kristin says, “Each of us has to live....No matter how we do it.”

A novel in which relationships develop more from pragmatism than passion.