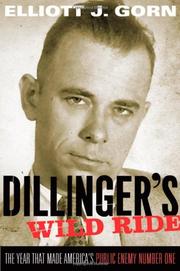 The Year That Made America’s Public Enemy Number One

One year in the life of legendary criminal John Dillinger.

With this new biography of the Depression-era bank robber, Gorn (History/Brown Univ.; Mother Jones: The Most Dangerous Woman in America, 2001, etc.) demonstrates that the American popular imagination never seems to tire of Dillinger and his legend. Since his death at the hands of federal agents on July 22, 1934, that legend has only grown. He has been the subject of popular fiction and nonfiction for years, as well as numerous films, including the upcoming Public Enemies, starring Johnny Depp as Dillinger. Gorn specifically addresses the phenomenon of Dillinger’s glamorous image and searches for an explanation of American society’s enduring fascination with outlaws. The author focuses on a one-year period in 1933 and ’34, when Dillinger and his gang robbed more than a dozen banks across the country. In the process, more than a dozen policemen, civilians, and gang members were killed, and reporters followed the gang’s exploits every step of the way. Though they were captured in January 1934, Dillinger managed to escape jail by—legend has it—carving a fake gun out of wood and brandishing it at the guards. Whether the wooden-gun story is true is still a point of contention—and Gorn doesn’t seek to solve the mystery—but newspapers reported it as real and began to write about Dillinger as a “calm, humorously cynical bandit” and “a carefree devil with many likable traits.” During the Depression, when thousands of people lost their homes to bank foreclosures, Dillinger became a Robin Hood–style hero to many—he took from the rich, even if he didn’t give to the poor. “The violence notwithstanding,” writes Gorn, “there was something deeply appealing about [him], his nerves, his coolness, his élan.” The author also makes a strong case that Dillinger’s favorable publicity galvanized federal agents’ efforts to bring him down.

A solid study of an outlaw and his image.