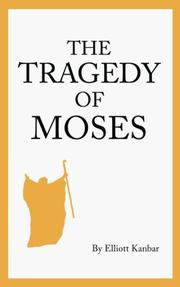 The Tragedy of Moses

A revisionary look at the story of Moses.

Kanbar (Don’t Let Your Film Die, 2015, etc.) prefaces his fun, poetic take by listing some of the questions surrounding the enigmatic, titular biblical figure—the foremost being: why does God refuse to let him enter the Promised Land? Moses’ tragedy, and particularly the fact that his fate is so out of synch with his service, holds a fascination for Kanbar. This book is his fanciful, speculative attempt at filling in gaps in the story, taking the form of a stage drama along the lines of the Broadway hit Hamilton. In it, a “Leader” takes on expository narration duties, but there are also speaking parts for a wide variety of characters from Scripture, including Moses; his brother, Aaron; the pharaoh who kept the Israelites in bondage in Egypt; a chorus of Israelites; and God himself. Kanbar opts not to adopt the stilted cadences of the King James Bible; instead, he uses a conversational, slangy diction throughout as he takes his audience through the familiar events of Moses’ life, from killing an Egyptian overseer (“This Egyptian dude / is goin’ to be dead”) to confronting the pharaoh and repeatedly demanding that the Israelites be set free. The pharaoh at one point responds, “You sound like a broken record. / Losing free labor, you know, / would cost me a lot of dough. / So the answer is still ‘No.’ ” Each segment begins with some spirited scene-setting by the Leader, proceeds through dramatic exchanges that often sound as if they’re meant to be sung rather than spoken, and concludes with a “Source and Commentary” paragraph for readers. The characters’ contemporary-sounding dialogue doesn’t always work, and it often feels forced (as when one character shouts out “Oy vey!”). Even so, the dramatic format does an effective job of dusting off these canonical characters and holding them up to fresh scrutiny. Indeed, Kanbar’s enthusiasm is so infectious that readers will wish the “Source and Commentary” sections were longer.

A fast-paced and engaging biblical dramatization.