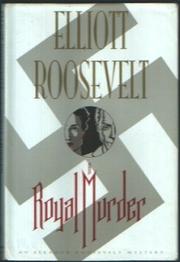 Roosevelt (Murder in the East Room, 1993, etc.) again presses his mother into service as an amateur crime buster in yet another of his posthumously published mysteries. This time Eleanor is sent on a diplomatic mission to the Bahamas, where the duke of Windsor, the former king who gave it all up for the woman he loved, recently has taken up his post as governor. The US has acquired naval bases on the islands as part of lend-lease. Both FDR and the British are afraid that, because of the duke and duchess's undisguised pro- German sentiments, all goings-on will be reported back to Berlin. A German invasion is even a possibility. The First Lady's entourage will, in reality, be trained intelligence agents sent to assess the situation. When they arrive, matters are worse than they feared: The colony is a hotbed of espionage. Then a wealthy Swedish industrialist—and Nazi spy—is murdered, and Jean King, who is posing as Eleanor's maid, is suspected. The First Lady must discover the real culprit and expose the intrigues for the sake of national security. Judy Garland and Erroll Flynn lend a hand in boozy cameos. Fact and historical fiction blur in what is, absent Roosevelt's clear fixation on his mother, just a routine mystery.