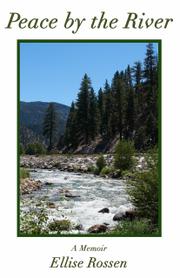 Peace by the River

An emotional memoir of love and spirituality.

While on a trip in the Sierra Nevada in the 1940s, the author’s family stumbled across a group of fishermen angling an exceptionally large trout, and her father rented a cottage next to the lucky fisherman. This began the family’s annual pilgrimage to what they called “the ranch.” For Rossen, the younger of two sisters, the ranch inspired tranquility and communion with nature. It was a welcome change for the author, who throughout her life struggled with self-doubt and the feeling that she didn’t belong. She saw her mother and father as emotionally distant, and put her sister on a pedestal. When, during her teenage years, her family purchased the ranch, a deputy sheriff named Ed handed her a small bouquet, but she lacked the confidence to respond. Year after year, she and her father returned to work the ranch during fishing season, and her encounters with Ed continued. Even after the family sold the ranch, the adult author, with her husband and children, kept returning to vacation in the area, staying in cottages that Ed and his wife had built. By the time Ed and Rossen revealed their feelings for each other, they were both married—and conflicted about what to do next. Although Rossen focuses on the tension between her and Ed, she also provides a beautifully written account of a woman coming into her own. The book’s power comes from the author’s willingness to open up; she writes in first person, bringing the reader into her world, even when she experiences loss. She eventually develops the self-confidence she so needed earlier in life; for example, she’d long believed she was inferior to her sister, but found out later that her sister always thought that Rossen had the perfect life. Overall, the author’s innocence and honesty will help readers to root for her.

An engaging tale of one woman’s personal development.