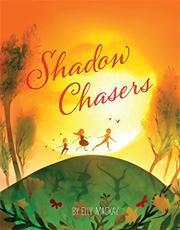 Intriguing illustrations draw readers into a meditation on shadows.

The text employs direct address, encouraging readers to imagine chasing shadows: “If you follow them, / and try to catch them, / they will flit and flutter away.” A trio of Caucasian children plays at dusk chasing shadows through a sunset-hued forest. The simple text employs rhythmic, sometimes-rhyming language that, like the book’s subject, never settles down and allows itself to be caught. The illustrations themselves have the look of dioramas, the cut-paper figures of the children, birds and animals set into the scenes so that they cast shadows. Whether they are photographed dioramas, entirely digital compositions or a combination of the two is hard to say, but the slightly surreal combination of two- and three-dimensionality will have children examining the pages closely. At one point, the two girls, running, cast the shadow of a deer; in another picture, an artfully arranged cluster of mushrooms casts the shadow of a squirrel. The three children have a 1950s aesthetic; their wide eyes, snub noses and tiny mouths would be at home in advertising or storybooks of the era, particularly the little sister with pigtails and pedal pushers.

Playful and more than just a little mysterious—like a shadow-puppet play in full color.