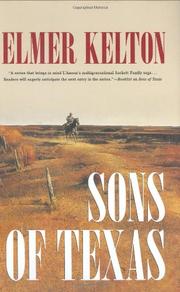 Looking for the next dream in 1816, Mordecai Lewis leaves Tennessee—and his wife and kids—to head west in search of fresh land to settle. He returns empty-handed but dream-packed. The Lewises have little truck with surveyors and boundaries, they just move west and take up empty land until civilization encroaches on them. Now Mordecai has Homeric tales of the Spanish land called Texas, a limitless spread of golden earth bending past the horizon, whose population of wild horses is protected by the Mexican military, led by the murderous Lieutenant Armando Rodriguez. When Lewis gets a band together to round up a herd of those wild mustangs, self-righteous thief and neighbor Cyrus Blackwood insinuates himself into it. Also along is the series hero, young Michael Lewis. At the Sabine River, Michael meets Marie Villaret and loses his heart, as does she. The backwoodsmen round up a herd and head back to the States, but they’re betrayed by Cyrus Blackwood. Rodriguez and his troops stop and murder the Tennesseans; Michael sees his father’s brains blown out. He manages to get back to the Villaret ranch, where he recovers enough to head home and find Cyrus Blackwood. Trying to bushwhack Michael, young Finis Blackwood gets his arm shot to pieces and later removed. The Blackwoods vow to kill Michael. Rather than ignite a feud that could go on for years and cost his family many lives, Michael sets off west. At the Villaret ranch he hears that Spain will allow 300 American settlers to create farms in Texas. He asks Marie to marry him when he returns with some land to settle.

Dialogue from heaven and storytelling fresh as a gunshot grip each page about the true West.