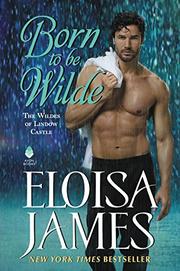 BORN TO BE WILDE

From the The Wildes of Lindow Castle series, volume 3

The third installment in the Wilde historical romance series features an heiress who has fallen on hard times and her infuriatingly attractive nemesis, the richest bachelor in England.

Lavinia Gray is horrified to discover that her mother is an opium addict who has decimated her daughter's dowry to support her habit. Once renowned for her beauty and riches, now Lavinia's "old life seemed to lie in shards around her feet.” To save her mother and herself, Lavinia proposes to Parth Sterling, a wealthy businessman taken in as a child by the eccentric and loving Wilde family after his Englishman father and Indian mother died. Lavinia and Parth have been thrown together often enough in the company of the Wildes that they have formed ill opinions of one another: Lavinia thinks Parth is too stern and correct, while Parth thinks the fashion-obsessed Lavinia is shallow. Parth rejects the offer but agrees to help Lavinia find a suitor, perhaps a European prince, while himself courting an Italian contessa. Of course, underneath the antagonism there is a mutual attraction, and as they give in to it, they come to know more about one other. Parth’s character arc is mainly to stop seeing Lavinia as “shallow as a puddle,” which he does, very quickly. Lavinia develops her prodigious, and bankable talents as a modiste and stylist, learning to embrace her love of clothing as an art form. Readers are advised to read the first two books in the series to better understand immediate past events, which are frequently referenced, and the large cast of characters James has created. Even with that background, however, the characters' motivations are often opaque or nonsensical, very little actually happens beyond psychological gymnastics, and Parth’s Indian heritage, which might have provided fertile ground for deepening this two-dimensional character, is almost completely sidelined.

A dull hero and little plot make this book best for readers with knowledge of the first two books in the series who cannot bear to miss any Wilde action.