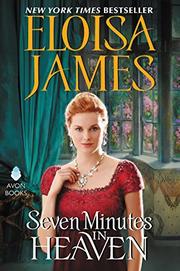 When Eugenia Snowe, owner of the most renowned governess agency in England, meets Ward Reeve, a rich inventor and bastard son of an earl, he turns her life upside down.

Ward needs a governess for his half siblings, and when even the elite Snowe agency fails him, he goes straight to the source—the owner, widow Eugenia. Ward’s life is tumultuous. His long-estranged mother has died, leaving her two legitimate children in his care—one of them is also heir to a title—so he figures he needs a governess and a wife. Tackling the governess issue first, he enlists the aid of the venerable Mrs. Snowe, but when two of her governesses don’t work out, he basically kidnaps her and takes her to his estate. Ward is the first man Eugenia has noticed since the death of her husband years ago, and she has never even considered marrying again. She enjoys her freedom and has no desire to put her wealth or the successful business she’s built into a man’s hands, as she’d legally be required to do if she remarried. But as she takes his household in hand and becomes entwined with the family, she begins to fall in love with all of them. Ward, who has lived abroad for years and not kept up with society, doesn’t realize she’s not simply a tradeswoman, but is in fact the daughter of a marquis herself. And while he’s falling in love with her, too, he deems her unworthy as a wife despite her subtle hints to the contrary. Romance star James (My American Duchess, 2016, etc.) takes a complicated conflict and infuses it with emotional depth, then heightens it with sexual tension, loss, misunderstanding, pride, and class bias with an interesting twist. Any historical romance reader will enjoy this book, but James’ fans will be especially pleased to revisit characters from the original Desperate Duchesses series titles—they’ll recognize Eugenia as Strange’s daughter from Duchess by Night (2008) and Ward (formerly known as Teddy) from Desperate Duchesses (2007).

Another bright, delightful read from a queen of historical romance.