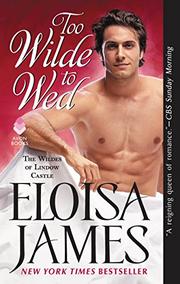 TOO WILDE TO WED

From the The Wildes of Lindow Castle series, volume 2

A jilted gentleman returns to England to find his former fiancee employed as a governess in his family’s castle, with a baby everyone thinks is his.

Lord Roland Northbridge Wilde left England two years ago, when his fiancee fled their engagement party and disappeared. The Duke of Lindow’s heir, North bought a commission and left for the war in America. When he returns, he is stunned to find his ex, Miss Diana Belgrave, at work as a governess in Lindow Castle. Her charges include Godfrey, a toddler whom everyone believes belongs to North. North accepts Diana’s explanation of Godfrey's true parentage and her sincere apology for all that has occurred. In fact, he finds he is still attracted to her, even more so now that the Georgian wigs and powder of a lady have been discarded to reveal a shock of red hair and a velvety laugh. Diana loves her work in the nursery, has no desire to be a lady, and that, it would seem, is that. But as North copes with the powerful wartime memories that disrupt his sleep, he finds himself spending quiet nights in the nursery with Diana, where they develop a lovely friendship over toast and honey. The first half of the novel is a delightful second-chance romance that captures the wonder of coming to know someone intimately, body and soul. Both characters suffer a bit in the second half, which shifts to recovering North’s reputation. North’s post-traumatic stress evaporates, and Diana takes rash actions that seem less and less in character. Extended sensual scenes disrupt coherent plotting. However, the pleasures of spending time with the large, loving, and very funny Wilde clan compensate to some extent.