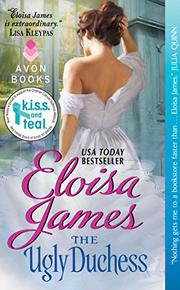 Though they love each other, a young heiress feels betrayed by her husband soon after the wedding and throws him out, sending them each on journeys of discovery that will impact their future in astonishing and potentially insurmountable ways.

When the duke of Ashbrook convinces his son and heir, James, to cover up a crime by marrying the duke’s ward, the less-than-beautiful Theodora Saxby, they are all surprised by how well the match goes over. Until Theo learns the truth—that James doesn’t love her, but married her only for her dowry and to shelter the nobleman from censure. Except that isn’t the truth. James actually does love her, but under the circumstances, she’s not willing to listen and throws him out of his house and their marriage. Heartbroken and guilt-ridden, James takes to the high seas on a boat his father owns—and disappears. Seven years later, just as the House of Lords is prepared to declare James dead and Theo a widow, James shows up in dramatic fashion, and the two must reconnect as their older, worldlier selves and sift through years of distrust, misinformation and the sharp, sniping commentary on their persons and their history. Regency favorite James’ charming romantic take on an “Ugly Duckling” storyline offers intense emotional stakes and characters who have headed down unexpected paths which may ultimately stand as obstacles to their shared happiness. Spanning seven years, the story sees James and Theo move from close childhood friends who discover a special connection through marriage to two separately formidable, triumphant characters. But after such starkly disparate paths and some hard-earned emotional equilibrium, can the two manage to find their way back to each other and the wholeness they knew together? James deftly navigates emotionally complex characters and situations with a chronologically long yet fascinating storyline, maintaining interest and clarity in their separate adventures, while managing to intensify the romantic tension through their estrangement.

A unique, winning romance that explores universal themes through an uncommon plot and eccentric characters, leading to a hard-won yet satisfying happily-ever-after.