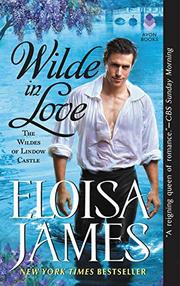 From the The Wildes of Lindow Castle series, volume 1

An adamantly private lady seeks a sensible match, but a notorious and rakishly handsome adventurer proves difficult to resist in the first of a Georgian-set historical romance series.

Lord Alaric Wilde, the long-absent third son of the Duke of Lindow, has just returned to England a celebrity thanks to his bestselling swashbuckling memoirs. Alaric has no idea of his own fame until his ship is met by mobs of screaming ladies who have stocked up on Lord Wilde memorabilia and repeat viewings of Wilde in Love, a scandalous and unauthorized play about the handsome rogue. During a house party at Lindow Castle, his family’s ancestral seat, Alaric encounters the very reserved Miss Willa Ffynche. He is intrigued at first by her lack of interest in him and later by her wit and intelligence. The trouble is that Willa “had absolutely no desire to be married to a man whose printed image was concealed in young ladies’ Bibles.” This first in James’ (Seven Minutes in Heaven, 2017, etc.) new Georgian-set series about the aptly named Wilde family and its sprawling estate in Cheshire is full of her signature style: witty repartee between a sensual hero and a smart, unconventional heroine and an effortlessly interconnected cast of characters you can’t wait to get to know better. A terrific writer, James conveys both the ordinariness and transcendence of sexual desire: “Yet reining in her desire felt like reining in the dusk. Or the rain. Something real, natural, uncontrollable.”

A charming, romantic, and unexpectedly funny start to a very promising new series. A must for James fans and a sure bet for everyone else.