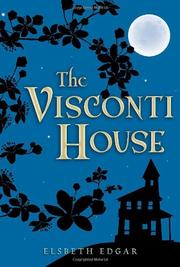 Whether it’s because she would rather write stories alone than hang out with her gossiping classmates or because she lives in the Visconti House, a crumbling Italianate villa (which, everyone assumes, must be haunted), Year 8 Aussie Laura Horton always feels like an outsider. When Leon Murphy, a loner in his own right, moves in with his odd grandmother, Laura notices that they have more in common than she originally thought, including wanting to solve the mystery behind Mr. Visconti, his once-ornate house and the woman he loved. Debut author Edgar’s quiet, old-fashioned storytelling, in which the children can sound older than their years, celebrates curiosity, hidden treasures and impromptu gatherings with spirited and creative family members. In the process of ferreting out the secrets of Mr. Visconti and his formerly splendid estate (with written letters, interviews and intuition rather than the Internet), Laura also discovers friendship, romance and accepting the differences in herself and others. Fans of Blue Balliett and Elise Broach’s Shakespeare’s Secret (2005) will enjoy another puzzle to solve. (author’s note) (Mystery. 9-12)