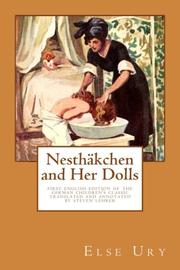 A new translation of the first novel in a children’s series from a century ago introduces a sunny German heroine.

Lehrer continues his important and approachable annotated translation of the series of beloved German children’s classics with this English-language rendition of 1913’s Nesthäkchen und ihre Puppen. This is the first installment in Ury’s 10-book series starring blonde, blue-eyed Annemarie Braun, the “Nesthäkchen,” or little pet daughter, in the family of a successful Berlin doctor and his wife. The series gave its readers—adults and children alike—a warmly sentimentalized picture of an “ideal German girl” from her early childhood to her old age. In this volume, Lehrer presents the very beginning of the series, in which the little Nesthäkchen has just turned 6 years old. Her parents spoil her, the family servants dote on her, her brothers tease her affectionately, and, as Annemarie herself asks one of her dolls, “Isn’t it a fine world?” Perhaps inevitably, this is by far the most whimsical and carefree of the Nesthäkchen volumes, with consequently less work for Lehrer the conscientious annotator to do (a footnote about whooping cough is pretty much all the critical apparatus he needs to add this time around). Annemarie spends her time being adored by her parents even when she misbehaves and being cosseted by her nanny even when she’s an adorable handful. Ury adds to the whimsy by taking readers inside the thoughts of Annemarie’s dolls (hence the book’s title), presenting their musings about their caretaker and the other toys in the nursery. It’s a bright, smiling look at German childhood in the old empire, untouched by the two horrifying world wars that lie in the future. At one point, the Nesthäkchen visits family members on a farm in Arnsdorf, giving Ury plenty of opportunities for heartwarming scenes evoking a country idyll (the book reprints the German edition’s charming illustrations). Lehrer’s translation remains clear and inviting throughout, and the volume leaves Annemarie poised to depart her nursery and attend school, where more escapades await.

The warm and inviting earliest adventures of a favorite children’s book character from another era.