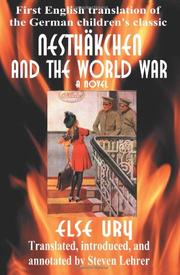 NESTHÄKCHEN AND THE WORLD WAR

A uniquely sentimental look at World War I through the eyes of a preteen German girl.

Though still immensely popular in Germany, Ury’s ten Nesthäkchen books are virtually unknown in the United States, an omission Lehrer looks to correct with this fine translation, complete with notes and a brief but highly informative introduction. The book is an engaging tale of two years in the life of Annemarie Braun, a Berlin doctor’s daughter most often referred to by the narrator as "Nesthäkchen,” a wonderfully appropriate sobriquet reserved for spoiled children. Separated from her parents by the war, Annemarie nonetheless lives a comfortable life with her grandmother, siblings, girlfriends and even a cook. The narrative traces her often wildly extravagant, juvenile reactions to the vicissitudes of war. Mercurial by nature, youthfully innocent and self-absorbed due to her social standing, Annemarie filters her experiences of war through her personality in ways that can rarely be deeply felt by the reader, who watches as she flits from one emotion to another, despondent on one page, exultant on the next. Her most sustained behavior proves to be the cruelty she evinces toward a new girl at her school, a long campaign of ill-treatment for which she must eventually seek redemption. Her story is ultimately one of growth through sacrifice, and, not surprisingly, Annemarie matures into a generous, likable young woman by the novel’s end and receives abundant karmic reward for her goodness. Lehrer’s infrequent annotations are precise and cogent, though concerned primarily with military matters sometimes to the exclusion of cultural subjects. With its stilted diction and narrative air of bemused didacticism resembling perhaps nothing more in the American canon than the Horatio Alger books, Nesthäkchen and the World War is no longer likely to appeal to the juvenile audience for which it was originally penned, but Nesthäkchen could, and probably deserves to, find her place in the classroom alongside Ragged Dick as an important glimpse into the spirit of a long-gone age.

A poignant, dignified tribute to Ury who, as a Jew during World War II, was murdered by her countrymen for whom she had written with so much loyalty and love.