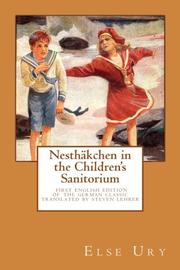 Nesthäkchen in the Childrens Sanitorium

A translation of a beloved German children’s classic.

Translator Lehrer here presents a new English-language version of Ury’s 1921 novel, Nesthäkchen im Kinderheim, with helpful new annotations to provide context and catch resonances that might elude modern readers. This is the fourth book in a long series chronicling the adventures of Annemarie Braun, “a slim, golden blond, quintessential German girl” who’s the youngest child (or nesthäkchen) of a Berlin doctor at the turn of the 20th century. The series follows Annemarie from childhood to old age, and in this volume, she’s 10 years old when she’s stricken with scarlet fever and sent to a children’s sanitorium, called Wittdun, by the North Sea. The book dramatizes her voyage to Wittdun, her introduction to her new home, and how she gradually came to know the staff and children there. Annemarie is like a Teutonic Shirley Temple, always smiling, always slightly mischievous, and always bringing out the best in the people around her. Despite Lehrer’s best efforts, though, she tends to be a fairly stilted and dull heroine. However, the context of the surrounding social setting is fascinating—a snapshot of a vanished world presented with charming, black-and-white period illustrations. Ury’s narrative tone is amusingly sardonic at times—affectionate but assessing, as it aims to appeal to both children and their parents. Her portraits of the various adults that Annemarie encounters are refreshingly textured; they’re not the one-dimensional authority figures that were more typical of children’s books of the time. The story also handles Annemarie’s shifting emotions, from feeling forlorn to gradually coming to like many people at Wittdun, in a lively, often charming way. It’s easy to see why this series might have been so popular with German families nearly a century ago.