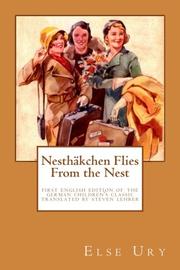 Nesthäkchen Flies from the Nest

A young woman ventures into the adult world in this vintage German novel.

Lehrer continues his ongoing annotated translation of Ury’s beloved prewar “Nesthäkchen” books with this English-language rendition of the sixth in that series, Nesthäkchen Fliegt aus dem Nest from 1921. In this latest installment, Annemarie Braun, the spoiled darling “Nesthäkchen” of her doctor father and his wife, turns 18 in a Germany still reeling from its catastrophic loss in World War I, although, as Lehrer rightly points out, the raw facts of history impinge very little on the mostly carefree events of this story. Those events center instead on Annemarie’s birthday celebration and her departure from home to attend college. This exit is naturally accompanied by a degree of worry on the part of Annemarie’s parents (“The ‘child’ will be defenseless alone in the big world,” they think. “What dangers lurked there at every step?”). But only a bubbly optimism prevails among Annemarie and her friends as they embark on what they see as some of their last free-spirited adventures before they’re encumbered with the duties and responsibilities of adulthood—including, for Annemarie, marriage and starting a family. The novel follows her to university and chronicles her various escapades—scheduling classes, making friends, taking the first breaths of independence—against Annemarie’s own high spirits and go-getter attitude. And as with the previous volumes, Lehrer does a steady, first-rate job of catching Ury’s frequent cultural allusions and in-jokes and explaining them in quick, unobtrusive footnotes: for example, “Gerhart Johann Robert Hauptmann (15 November 1862-6 June 1946) was a German dramatist and novelist. He is counted among the most important promoters of literary naturalism, though he integrated other styles into his work as well.” Lehrer’s translation, smooth-flowing and easily approachable, brings readers into this series of proto-YA fiction set in the long-vanished world of a Germany before the horrors of World War II. The “Nesthäkchen” of these novels is the living embodiment of the purist, nationalistic sentimentality of that Germany.

An effective translation of a series that gives eye-opening glimpses into the lives of the comfortable middle-class in Germany between the world wars.