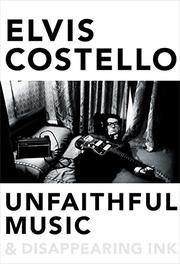 Everything you ever wanted to know—and more—about hyperliterate songwriter and performer Costello.

It becomes immediately clear in this voluminous debut memoir that Costello’s prose cuts with the same spiky wit and observational power as his well-known lyrics—e.g., upon meeting Bruce Springsteen: “he laughed like steam escaping from a radiator.” What this memoir could’ve used was a more proactive editor to rein in its disjointed structure and rambling eccentricities. In one chapter, we learn about Costello’s 20-something rise to stardom in 1977; the next chapter covers his birth. Readers will need to forget trying to follow this memoir in a chronological way, which may be appropriate when considering his unconventional songwriting. Whatever the Byzantine structure, certainly there’s no part of his life left untouched—from his childhood growing up in Liverpool and London watching his father perform as a singer with the Joe Loss Orchestra to getting his first band together and on to becoming the jittery 1970s New Wave answer to Bob Dylan. Although Costello (born Declan MacManus) led a routine, working-class existence in his teens and early 20s, not surprisingly, the most scintillating time in his life to read about is his unlikely rise to fame in the ’70s with his band the Attractions and Stiff Records. Costello isn't coy when discussing the origins of his songs and detailing the often surprising musical influences behind them. His writing on his later elder statesman years—including his marriage to Diana Krall and his dabbling with string quartets and orchestras—is pleasantly informative, but his discussions of his middle ages are mostly akin to reading someone’s CV. They lack the same thrill of youth that drives the recollection of his hand-to-mouth days as a struggling punk.

Overlong but still packed with great lines, vivid anecdotes, and plenty of photos. Certainly a treat for his many fans.