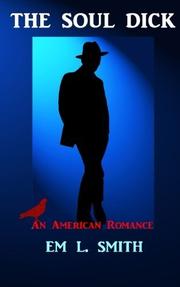 The Soul Dick: An American Romance

In this debut novel, Mason Burr resembles no other private eye in the much-loved genre; the bad guys he targets turn out to be his clients’ hang-ups.

Burr’s latest case involves Jerry Zobec, a classic schlub. Zobec hires Burr, who claims he can “debug personalities” in 24 hours, because he’s desperate. Zobec hates his job; his girlfriend, Amy McFine, has left him; and he lacks friends. Weltschmerz—the feeling that the world is going to hell and that any good guy is hopelessly beleaguered—is Burr’s diagnosis. Thus begins the detective’s mission to rid Zobec of this feeling or at least show him how to cope with it. Burr and Zobec will commune for 24 hours; they will even eat together—at the Acid Reflux Cafe, where world-weary Louie, the proprietor, dispenses tough love. Zobec harbors resources, however. He is a real motor mouth, but what comes out of that mouth is killingly funny and shows a deep interest in the world, even if that engagement remains negative. His monologues consist of well-informed rants about the health care crisis, the out-of-control gun culture, the Middle East—and many other topics. In short, Zobec hasn’t really given up, though he doesn’t realize it yet. With a deadline looming, Burr faces a formidable task: “What in the hell have you done?” he asks himself, fearing that Zobec might be certifiable. But the investigator soon grasps his client’s potential. Smith exploits an ingenious idea here. For starters, she concocts a wonderful sendup of the detective noir genre (Burr toils in a seedy walk-up, locals call the neighborhood the Crosshairs District, gunfire sometimes breaks out, etc.). In addition, the author has invented some colorful characters. The private eye’s name is a witty homage to Perry Mason and Raymond Burr. Clyde the Psychic, who works in the gumshoe’s building, sometimes appears on “Seer Sucker,” a radio show. A pigeon with attitude named Drake assists Burr. Best of all is Zobec, who is irritating but basically lovable and a useful platform for Smith’s political and social views. And for her jokes: “Can you believe they demoted Pluto to a dwarf planet?” Zobec complains to Burr. “It should go rogue and get the fuck out of the whole solar system. Start someplace new.”

A clever tale about a detective’s daunting case from a promising author.