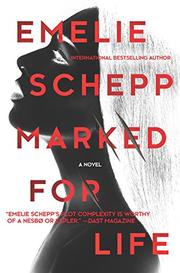 The murder of a local official in charge of asylum issues sparks the resurgence of long-buried memories for the prosecutor on the case.

In the opening of this first installment of a Swedish trilogy, Hans Juhlén is found shot to death in his Lindö home. When the squadron of traditionally gloomy Scandinavian detectives arrives, they discover a forensically uninteresting scene, save for a child’s handprint smeared on a window. The Juhléns are childless. Enter the public prosecutor assigned to the case, Jana Berzelius, fond of smart skirts, winning cases, and not smiling. She’s the adopted daughter of a former prosecutor, who’s also fond of winning. According to Hans’ wife, Kerstin, his work at the Migration Board was stressful but no more so than usual, so it’s a shock to her when detectives show her Hans’ stash of threatening letters. Soon after, the body of an adolescent boy, already scarred from heroin use, is found near the sea, with a gun that matches the weapon that killed Hans. During the autopsy, a strange tattoo on the back of the boy’s neck sends the prosecutor reeling and ensures that the reader sees connections with earlier italicized sections about a young immigrant girl ripped from her parents and trained to kill, a link the character makes frustratingly late. As the case progresses and morphs, Jana tries to dig into the hidden past.

An intriguing if bumpy start to a new series; the challenging, multilayered heroine makes it worth the read.