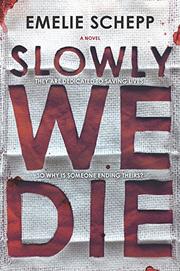 Back for a third adventure, Swedish prosecutor Jana Berzelius is forced to harbor escaped murder suspect Danilo Peña—a childhood friend–turned-nemesis—as the city of Norrköping is terrorized by a second homicidal menace.

Danilo is in possession of Jana's childhood diaries and notebooks, which she badly needs in order to penetrate blocked memories of her early years. She knows her birth parents were murdered by a child trafficking ring and—alongside Danilo, the only person with access to her past—she was trained by her captors as a child soldier. But the rest is mostly a blank. When Danilo, who grew up to be a drug smuggler, offers to turn over all her jottings in exchange for her letting him hide in her apartment, she can't refuse—especially if she wants to keep her reputation from being blemished by unseemly truths. Meanwhile, a serial killer is doing horrendous things to his victims, beginning with a female nurse who is found tied to a chair with her amputated hands on the floor. The obvious suspect is a pill-popping paramedic with connections to all the victims. Alternating and overlapping narratives with musical precision, Schepp may be the smoothest storyteller among the new crop of Nordic noir aces. While the gruesomeness of the murders seems imported from a nastier, more intense kind of thriller, the ingenious plot reveals and hidden connections keep you glued to the action. So, in a sad and subtle way, does the sense of helplessness that infects the relationships in the book, including the one between Jana and her father, a corrupt prosecutor left brain damaged by a recent suicide attempt.

The final installment in an announced trilogy, following Marked for Life (2016) and Marked for Revenge (2017), this is Schepp's best effort yet in its deft blend of psychological suspense and procedural X's and O's.