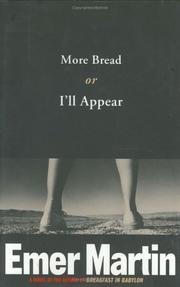 Irish writer Martin’s audacious second novel (after Breakfast in Babylon, 1997) traces the odd lives and uncertain prospects of the five children of a self-absorbed mother and a father hounded by mental illness. At the heart of this sad, sharp-eyed story is a quest. Aisling, the eldest child, the one most like a real mother to the other four as they—re growing up, eventually flees the children’s native Ireland, communicating only intermittently with the family. Later, several of the other children depart as well, to England or to America, restlessly searching for some sort of life worth living. Keelin, the youngest, most nearly stable, and most responsible, is finally persuaded by her mother to go in search of Aisling, who, after years of adventures abroad, has disappeared. The sensual, assertive Aisling has left a variety of beguiled or battered figures in her wake, and as Keelin retraces her sister’s erratic path—leading her to the seamy underside of Tokyo, then on to America’she begins to sense a liberating effect: new possibilities, a life outside the old rather dull certainties, suddenly seems possible. There are other adventures along the way: Keelin’s sister Orla reclaims a son she gave up for adoption many years before; Patrick, Keelin’s only brother, sinks deeper into a series of phobic, self-destructive rituals. And Oscar, Keelin’s uncle, who is both gay and a priest, finds his carefully suppressed past irresistibly catching up with him. Martin renders all of this in a prose of exuberant power and velocity. While the fate of many of the characters is more grim than joyful, and while Keelin’s climactic confrontation with Aisling in a setting of tropical squalor is more painful than liberating, the novel nonetheless carries a kind of jaunty, defiant good humor right to its close. Startling, distinctive work that’s about the way families shape lives, and that charts with a kind of unflinching precision the costs of escaping from the past. (Author tour)