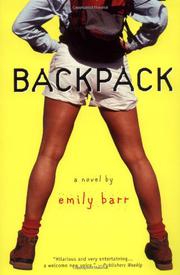 A richly comic first novel about a British journalist, in her late 20s, who is just getting over the sudden death of her mother, an event both more and less traumatic than one would imagine.

Determined to plow on with life, Tansy thinks about how to dress for the funeral—“I enjoyed the bimbo widow look”—and what to do with the £50,000 she’s just inherited. She and boyfriend Tom decide to take a tour of Southeast Asia, a plan that falls apart when Tom splits up with her. After a days-long bacchanal of dinners, drugs and drink, Tansy jets off alone for Vietnam. Used to her urban Soho apartment and the easy accessibility of designer clothing and drugs (cocaine’s her favorite), it takes her some time to get the hang of things there. But soon she’s met up with a group of Australian “backpackers”—a term Tansy furiously refuses to apply to herself—and started to enjoy her new life. Dropped clunkily into this breezy narrative is a subplot about a maniac killer of blond backpackers in Asia, a fact that doesn’t worry blond Tansy as much as it does the people she e-mails back home. Bit by bit, she surprises herself by befriending people she wouldn’t have associated with in London and even finding a new boyfriend, far and away more caring than Tom ever was. Tansy’s easy elitism makes for hilarious telling; and though her moods and lifelong convictions seem to change in a minute, Barr’s intimate knowledge of Tansy’s character—she herself is a British journalist (London's Observer, The Guardian) who spent a year travelling in Asia—makes all come off not as Bridget Jones-esque flightiness but just as the ever-churning mind of a bright and rebellious woman in flux.

Only the clumsily handled serial killer subplot and a depressingly tidy climax mar a sparkly and entertaining debut.