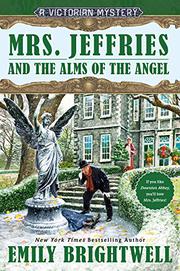 MRS. JEFFRIES AND THE ALMS OF THE ANGEL

Christmas is nigh, and there’s a murder to solve.

Inspector Nivens may have ambitions far beyond his local posting, but he’s so hapless as a detective that it’s no surprise when he loses a sensitive case involving the murder of well-to-do Margaret Starling in her yard to Inspector Gerald Witherspoon of the Metropolitan Police. Witherspoon, whose record is stellar, is independently wealthy, good-natured, and unaware that for years his staff and friends, especially his clever housekeeper, Mrs. Jeffries, have fed him the clues that have been indispensable in closing his murder cases (Mrs. Jeffries Delivers the Goods, 2019, etc.). Determined to solve the puzzle of Margaret’s murder before Christmas, Witherspoon’s staff scatter throughout the neighborhood of the Starling residence, each of them searching for clues using their questioning methods tailored to every social stratum of Victorian London, from the housemaid to the well-heeled neighbors. Margaret’s recent odd behavior seems to have something to do with the Angel Alms Society of Fulham and Putney, where she was a generous donor who served on the advisory board. She was also suing Mrs. Huxton, her next-door neighbor, whom she accused of trying to ruin her reputation. Alibis are tested and possible enemies questioned. The suspects range from that neighbor to Margaret’s deceased niece’s husband to the vicar of St. Andrew’s Church, all of whom have reason to be angry with her. Mrs. Jeffries struggles to get on the right track as other members of the amateur detective group pass information to Witherspoon’s constable, who’s in on their scheme. It all comes down to love or money.

Not exactly groundbreaking, but fans will enjoy this cozy Christmas addition to a long-running series.