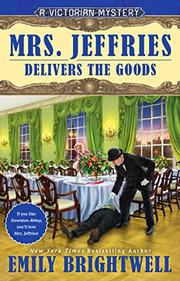 A Victorian police inspector never realizes that his amazing success rate is due to his household staff.

Inspector Gerald Witherspoon of Scotland Yard is called in to a case of suspected murder at the Lighterman’s Ball. James Pierce, who runs a successful shipping business, has for many years hosted a dinner and ball for his employees. This year he’s added friends and members of his board of directors and moved the affair from a pub to the Wrexley Hotel. When Stephen Bremmer, who’s about to join the board, keels over after drinking a champagne toast, Dr. Bosworth, a police surgeon, and Wiggins, Witherspoon’s footman, are by chance both attending as guests. Bosworth immediately suspects that Bremmer was poisoned. While Witherspoon pursues official paths, his household staff and their circle of friends and informants set out to dig up information about anyone sitting at the head table who seems most likely to have had the chance to poison Bremmer when the lights were turned off just before the toast. A man universally disliked for his rudeness and snobbery, Bremmer married a slightly older woman with money, but the allowance she’s granted him hasn’t been enough, and he’s been making extra money by blackmailing people in his social circle. So many of them have secrets they’re desperate to cover up that it will be no easy task to unmask the killer. Mrs. Jeffries, the housekeeper with an amazing talent for uncovering the truth (Mrs. Jeffries and the Three Wise Women, 2017, etc.), is enshrined at the center of the web, as all who work in the household and many who don’t bring her the tidbits of information she needs to solve the puzzle.

All who enjoy Victorian mysteries will enjoy this complex tale of love, hate, class snobbery, and murder.