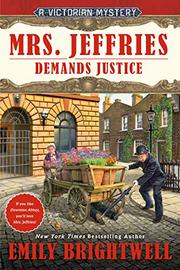 A police detective accused of murder is so unpopular that even his colleagues think he did it.

Bert Santorini is found shot in a Whitechapel alley. At his side is an expensive dueling pistol soon identified as the property of Inspector Nigel Nivens, a well-connected but thoroughly dishonest cop. When a newspaper story claims that the police are covering for Nivens, Scotland Yard calls in Inspector Gerald Witherspoon, who’s solved many murders and has an impeccable reputation for honesty. Few know that Witherspoon’s success rate is due to his clever housekeeper, Mrs. Jeffries; his household staff; and some friends and neighbors, all of whom have contacts in many levels of society. Although none are fans of Nivens, who’s tangled with Witherspoon in the past, they’re so dedicated to justice that they set to work once more to uncover the truth. Santorini had an ice delivery business but was well known for being a snout who testified at a trial that sent three of the O'Dwyer brothers to jail, leaving their mother in a vengeful mood. Since Santorini also had entanglements with several women, there’s no dearth of suspects for Mrs. Jeffries’ team to explore. Even after he discovers that Nivens is meddling in the case and has continued to lie, Witherspoon still doesn’t think him a killer. But time is running out to discover the truth.

Mrs. Jeffries and her diverse Victorian team shine again in an entry that poses an especially complex puzzle.