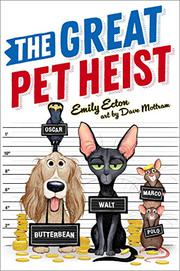 Five spunky pets go to extraordinary lengths to save themselves from abandonment.

The pets: wiener dog Butterbean; Walt, nee Lucretia, a secretive black cat; Oscar, a dignified mynah; and Marco and Polo, an exuberant pair of rats. The hapless owner: an elderly woman affectionately dubbed Mrs. Food. The incident: a bad fall (entirely Butterbean’s fault, though she hates to admit it) that lands Mrs. Food in the hospital and sends the pets scrambling to become “independently wealthy” lest they be removed from her apartment to the shelter. The accidental discovery of the wealthy Coin Man leads them to plot the “heist of the century” with the assistance of an octopus named Chad and vent-dwelling Wild Rat Wallace. Ecton tells the story from the pets’ perspectives, which, while impressively executed, proves to be this madcap adventure’s biggest shortcoming. The limited experience of the pets ensures that the human issues depicted—international crime, care of the elderly, deployed caregivers, deception of Child Protective Services—are treated more flippantly than their gravity merits. The scenes dealing with the kidnapping of a child are particularly dire; the character of the Coin Man feels almost too sinister for an otherwise lighthearted children’s novel. Yet lighthearted it is: Bantering dialogue, the distinct personalities of the pets (expressively illustrated by Mottram), and the whimsical premise make for an exciting caper. Mrs. Food and the Coin Man present white; the pets’ temporary caregiver has Korean heritage.