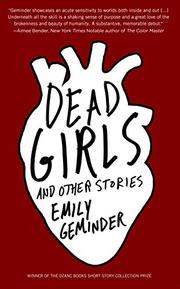 DEAD GIRLS AND OTHER STORIES

A chorus of dead and living girls and women in nine stories.

Geminder’s cohesive debut features diverse settings, but whether in India, Cambodia, or New York, her female protagonists face similar anxieties. These are the horrors of the body, the limitations of language, and the constant presence of death. Events recur and become motifs. In “Edie,” the narrator recounts the rape of a high school girl. The strange part, she thinks, is her own inability to remember how she first heard of it. “It was as if the story had been conveyed not in the usual way, person to person, but had existed quietly inside me and was only now revealed.” In “Coming To,” the staff of a Cambodian newspaper begins using the term “rape-murder” in their articles despite questions from the copy chief. “Almost every day, there’s at least one rape in the paper....Sometimes they are rape-murders.” There is an eerie convergence of female identities and experiences across time and space—mass faintings, possession by aliens and by spirits, and the horrific series of dead girls that permeates the lives of the living in the title story and throughout. We meet an old hippie man who refers to all girls by the same name—Annie—and in “Phnom Penh,” four women, narrating in a collective first person, give voice to this concept themselves: “We’d come to replace a dead girl,” they explain. “We were replacements,” they note. “We were girls.”

Startling, far-reaching tales of women who haunt and are haunted.