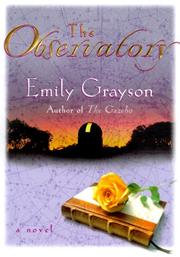 It’s back to Longwood Falls for the author of The Gazebo (1999), though Grayson focuses on a new cast of characters in her upstate New York town. And first, local librarian Liz Mallory must travel to the ritzy Long Island community of Stone Point, home of her twin sister, Harper. Liz has never been close to her twin, a wealthy, world-famous artist, but when Harper’s eight-year-old daughter is killed in a sledding accident, she comes for the funeral and stays to minister to seven-year-old Nick, who’s being ignored by his grief-stricken mother. Then Liz meets gentle, wounded David Fields (renter of an estate with the eponymous observatory), and it seems love will overcome her lifelong feeling of being overshadowed by glamorous Harper. Inevitably, complications ensue—thanks to Liz’s terminal lack of self-esteem—but readers may not care much, given the narrative’s low energy level and utter predictability.

Agreeable, but nothing more.