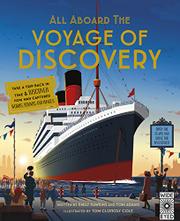 ALL ABOARD THE VOYAGE OF DISCOVERY

From the All Aboard series

A lift-the-flap cruise past select highlights in the history of human communication, from cave paintings to talkies.

Squired by a pair of tour guides—one black and one white—readers board an unusually versatile ocean liner in 1927 for passage to 1799 Egypt for a look at the newly discovered Rosetta Stone. From there it’s on to visit 16th-century English graphite mines and learn about the invention of the pencil; 17th-century Strasbourg (then a free city of the Holy Roman Empire) to witness the birth of newspapers; then see both Napoleon’s “optical telegraph” and the better-known electrical sort in action; and get good looks at the births of airmail, radio, photography, and finally moving pictures. Along with sets of clues to a side mystery that are coded in various alphabets and ciphers, the multiple flaps incorporated into each big, bright painted scene conceal descriptions and diagrams of each invention, notes on related advances, historical anecdotes, and tributes to significant figures. Alert viewers will spot repeated text under one flap and (a classic error) wrong-way threads on the screw of the printing press. Also, TV doesn’t make the cut, nor do any developments after the arrival of talking pictures. Otherwise, the liner puts in at major ports of call while venturing into some less-well-known technological inlets.

Zigzag itinerary notwithstanding, a brisk and inventive excursion.