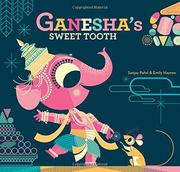 Emphasizing Ganesha’s playfulness, this story is a takeoff on one legend about the elephant-headed Hindu god.

Ganesha, god of beginnings, is also a mischievous boy. Together with his sidekick, Mr. Mouse, he loves to eat candy. When he bites into “THE SUPER JUMBO JAWBREAKER LADDOO!,” he breaks his tusk. He is so angry that he throws his tusk to the moon, but he accidentally hits an old man. Not just any old man, but Vyasa, the poet who has created the Mahabharata, the Sanskrit epic. In this tale, Vyasa suggests that Ganesha be his scribe and use his tusk as a pen. In the traditional story, Ganesha starts to write with a pen, and when it breaks, he uses his tusk as his writing implement. Here, he starts right off with his tusk. The unusual conditions of the legend (that Vyasa never stop reciting the poem and that Ganesha must understand the meaning of the epic) are here, but they are presented in an unusual double-page spread in which Mr. Mouse, as lawyer, sets up a contract. The illustrator is a Pixar animator, and the digital illustrations employ a confectioner’s palette of hot pink and greenish blue, sometimes against dark backgrounds. Strong shapes and a mix of modern objects (Ganesha tries to use a stapler and tape dispenser to re-attach his tusk) with traditional designs add to the fun.

A sugarcoated but hardly saccharine introduction to one Hindu myth.